As a freshman, the college admissions process, having painfully endured it just last year, remains fresh in my mind. Like every other university-bound high school senior, my stomach churned with anticipation from the day I submitted my applications to the day I received my last decision letter (well, e-mails, actually). Embarrassingly, my friends and I frequented collegeconfidential.com, a chat room website where equally paranoid students can post their statistics – SAT scores, list of extracurricular activities, GPAs, etc. – and ask their peers to “chance” them. They respond to the original post with comments like, “You’ll definitely get accepted. Congrats!” “I’d say 70% chance,” and “I doubt you’ll have a good chance at Duke.” (Yes, those are taken directly from a “Chance me for Duke!” thread.) Despite how silly this may seem, it’s popular. In fact, there’s an app for that! 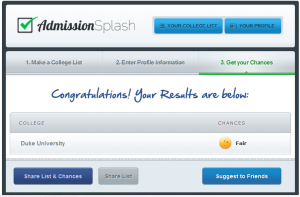 AdmissionSplash, the new facebook application, was launched last week. Just for fun, I tried it out. I filled in my test scores, checked yes that I volunteered in high school, no I don’t plan on being recruited for sports, and other similar things. At the end, AdmissionSplash told me that my chances for acceptance at Duke University were only fair, and the accompanying yellow emoticon seemed to say, “Be careful.” I believe I was rightfully accepted, and so, albeit a bit late, I have some reservations about the application.

On the one hand, things like College Confidential and AdmissionSplash give students an outlet for their stresses. They feel relief when someone tells them that they will probably get accepted at their dream schools. They feel consoled when they happen upon someone with a seemingly less qualifying résumé applying to the same dream schools. On the other hand, ragingly competitive high school seniors and computers aren’t very good at forecasting what admissions officers are going to do, particularly at highly selective universities that have to look at more than just test scores.

If Duke had evaluated me based on test scores alone, my chances at getting in were only fair, to be honest. From that perspective, AdmissionSplash was right. But the questionnaire didn’t allow me to say what my application essay was about, if I had good letters of recommendation, or even what kind of leadership positions I had in high school. These aspects of an application can make or break a student regardless of standardized test scores – whether they are perfect or less than average.

AdmissionSplash and the chat boards on College Confidential are unethical in their inaccuracy. Though they occasionally make a good prediction, they equip students with false expectations. Students who have perfect SAT scores but lack meaningful extracurricular activities are given false hope that their acceptance is inevitable. Students, whose scores aren’t the greatest, but their essays and letters of recommendation reveal intellectual passion and a thirst for knowledge, become anguished because they are told their chances are less than fair.

Though these programs help students push their anxieties under the rug until decisions are released, they do nothing to prepare students for the moment that matters, when they open the envelope and receive a decision they weren’t expecting.