Acceptance or Resistance: Your Move 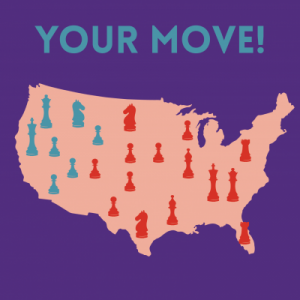 As if it hasn’t already been on everyone’s mind and news feeds, let’s talk about what happened on the night of Tuesday, November 8th, 2016.

During the election cycle, I felt a large range of emotions – anger, irritation, fury, cynicism, suspicion, and annoyance, to name a few. As the poll results came in, however, at around 10 P.M., my stomach started to churn, my brain began to mentally log out, and my lungs couldn’t get enough oxygen inside of me. It was the first time I truly felt fear strike my heart.

When I first heard Trump speak about building a wall along the U.S.-Mexico border back in June 2015, I remember how it took me by surprise first and then made me furious. A wall? Thinking about the possibility of the physical materialization of a purposefully divisive delineation created a deep suspicion in me that this could be leveraged in starting a propaganda against immigrants, especially those undocumented. A wall, reinforcing the idea of a border, would further make people hyper-aware of the in-group and the out-group. Those in the in-group would grow hyper-anxious of the out-group due to love and fear for those close to them.

Of course, this was just the beginning of the violent, incendiary, white supremacist rhetoric that Trump spewed out. However, the media, throughout the election cycle and up to election night, failed to seriously assess the threat posed by Trump and lulled half of America into thinking that they would have their first female president.

He has drawn out the inherent white supremacy that America was founded on (think Native American genocide, slavery, Jim Crow laws, Chinese Exclusion Act, Japanese internment camps, mass incarceration, gentrification, War on Poverty/Terror/Crime). Thinking with more current relevance, although not detached and isolated from the historical past, Trump has deep financial investment in the Dakota Access Pipeline. The pipeline is currently facing the fierce #NoDAPL protest which is, in turn, being suppressed violently. Hate crimes against Muslims and Jews have risen considerably within the past few years and are certainly not expected to drop in the wake of an impending Trump presidency.

Despite this, many (neo)liberal and moderate Democrats are calling for unification, compromise, reaching across the aisle to work. I argue that this peace stands on a bloody high ground. They tell Americans to go for the moral high ground to maintain a stable, peaceful political status. President Obama urged Americans to give Trump a chance. He doesn’t “think he is ideological,” but rather, “pragmatic” which will “serve him well as long as he has got good people around him and he has a good sense of direction.” They are talking about working with an administration headed by someone they compared to Adolf Hitler before election night.

On November 21st, 1922, the New York Times ran an article on Adolf Hitler. The normalization of his propaganda struck me immensely as I drew parallels to the narrative circulating within elite political figures and the media. The article stressed that Hitler’s rhetoric “was not so genuine or violent as it sounded, and that he was merely using anti-Semitic propaganda as a bait.”

Frank Frison, a Holocaust survivor, stated the following: “If fascism could be defeated in debate, I assure you that it would never have happened, neither in Germany, nor in Italy, nor anywhere else.”

In Die Reden Hitlers am Reichsparteitag 1933, a 1934 Nazi book that contains complete transcriptions of all speeches given by Hitler at Nuremberg in the previous year, Hitler is quoted to have said that “only one danger could have jeopardised this development – if our adversaries had understood its principle, established a clear understanding of our ideas, and not offered any resistance. Or, alternatively, if they had from the first day annihilated with the utmost brutality the nucleus of our new movement.”

Why is the political imagination of the right wing white supremacists able to actualize in reality and yet liberals/centrists/moderates insist on compromise? What does compromise and working together even look like? Does it mean that we’ll agree to only deport 500,000 undocumented immigrants as opposed to 2,000,000? Does it mean that we’ll agree to build a wall for half of the U.S.-Mexico border as opposed to the whole border? Does it mean that we’ll fight against criminalizing the Muslim burqa while letting the police surveil mosques and establish a Muslim registry, not unlike the post-9/11 National Security Entry-Exit Registration System (NSEERS) program, with post-WWII Japanese internment camps as precedent? Does it mean that we’ll agree to dismantling Planned Parenthood in exchange for equal pay across genders? Why are white supremacist fascists mocked and used for humor capital (see: memes) and the radical utopic ideas of progressives dismissed under the premise that the ideal is never within our grasp? How does remaining moderate, negotiable, and complacent help to shove the world into meaningful progress towards restorative justice and equity?

Trump has already begun forming his administration. He hired Steve Bannon as his chief strategist; Bannon served as executive chairman of Breitbart, an infamous white supremacist right-wing news outlet that hosts a category of articles tagged “Black Crime” and perpetuates anti-Semitism. A film colleague of his said that Bannon “occasionally talked about the genetic superiority of some people and once mused about the desirability of limiting the vote to property owners,” echoing the eugenics movement and racist voter suppression tactics. He hired Reince Priebus, Republican National Committee chairman, steadfast adviser to Trump’s presidential campaign, and Bannon apologist, to be the White House Chief of Staff. He hired retired Army Lt. Gen. Michael Flynn as his National Security Adviser. This is an anti-Islam and anti-Muslim ex-general who believes that “Islamist militancy poses an existential threat” and has spread baseless conspiracy theories like that “Shariah (Islamic law) is spreading in the United States.” This lead to the creation of the phrase “Flynn facts,” things that Flynn would say that weren’t true at all. He would also break the rules he thought as stupid, including sneaking out of a military compound in Iran, installing Internet connections in his Pentagon office, and giving classified information to NATO allies. These were all forbidden and done without approval.

Others have not been hired, only nominated, because they require the confirmation of the U.S. Senate. Trump nominated Mike Pompeo, Kansas congressman, to head the C.I.A. He wants to expand even further the government’s surveillance and data tracking range, criticized Obama’s closing of secret prisons, also known as C.I.A. black sites, and held prominence as one of the more persistent inquirers into the Benghazi and Hillary Clinton’s role in it. He nominated Jeff Sessions, Alabama’s attorney general and U.S. attorney, as U.S. attorney general. Sessions was one of the first Congress members to endorse Trump back in February and advised many decisions and policy proposals during Trump’s campaign, including his immigration policy, national security and vice presidential pick. However, he could heavily influence policies regarding legal and illegal immigration, climate change, and civil rights, including gay marriage and the Voting Rights Act. This is a man that was rejected as a federal judge for being too racist for the Reagan administration back in the 1980s as he thought that civil rights advocacy groups, such as the NAACP and the ACLU, were “un-American,” “communist-inspired,” and “did more harm than good when they were trying to force civil rights down the throats of people who were trying to put problems behind them.” With regards to a prosecution case of a Ku Klux Klan, or the KKK, member who lynched a Black man, he stated that he thought the KKK was okay until he learned that some members smoked marijuana. Antiblack sentiments were also reflected in his use of a racial slur after a court hearing. He nominated Betsy DeVos, billionaire and school choice advocate while holding no education degree, no teaching experience, and no public school experience for herself or her children, as Secretary of Education. The DeVos family has funneled money towards school vouchers, which redirects funding away from the public school system and towards private schools. DeVos serves on the Acton Institute board, which protects corporate interests and uses Christian ideology to dictate academic curriculum, public policy, and sociopolitical institutions, and supports funding for-profit Christian schools.

In the running for Secretary of Homeland Security is Kris Kobach, Kansas Secretary of State. He is well-criticized for being an anti-immigrant hardliner, nativist, and relentless proponent for demanding proof of citizenship before people register to vote. He’s affiliated with the Immigration Reform Law Institute, which crafted Arizona’s SB 1070 “show me your papers” immigration law that the Supreme Court struck down as unconstitutional, amongst other activities involving him in restrictive immigration measures in Alabama, Georgia, and South Carolina. As a Romney adviser, he told the Washington Post that there would be “no legal status of any kind for the undocumented” and is credited with the idea that Mexico will pay for the wall along the U.S.-Mexico border. He also helped implement the post-9/11 NSEERS program mentioned earlier, and he was photographed with Trump holding a partially covered stack of papers titled “Department of Homeland Security Kobach Strategic Plan for First 365 Days.” The page in the photograph is divided into five parts of which the first part is shown fully and titled “Bar the Entry of Potential Terrorists.” It outlines the reintroduction of the upgraded and updated NSEERS program, the addition of “extreme vetting questions for high-risk aliens,” and the reduction of “intake of Syrian refugees to zero, using authority under the 1980 Refugee Act.”

This is not a comprehensive investigation into everyone within or already in Trump’s administration, but it does paint a horrifying and troubling picture of the United States’ future. History is an important artifact that clearly indicates the recursive nature of human society. We, collectively, have not started to analyze and totally comprehend the dangerous precipice that the American political landscape stands on right now. There’s often the rhetoric of how the U.S. does not negotiate with terrorists, so why are we trying to negotiate with authoritarian fascists? Already there are budding signs of dissent and protests becoming criminalized under the Trump administration. If we are to truly care and protect those that always have been and will exponentially be marginalized, oppressed, silenced, and erased, it’s worth thinking about what active disruption and resistance, physically and psychologically, looks like and its ability to change the yet unwritten future.