A Tale of Two Cemeteries

James Wahlberg will be working with the Friends of Geer Cemetery to develop stories and histories of people buried in Geer Cemetery for museum exhibits and web publication.

Was it the best of times?  Was it the worst of times?  Answering those questions during the Jim Crow era in the American south depended heavily on one’s position in a space of racial categories.  The Plessy v. Ferguson Supreme Court decision of 1896 upheld the doctrine of “separate but equal” and so sustained and legitimized very separate and very unequal facilities for people of color and white people.  These facilities included those for education and transportation and the cemeteries people used to bury their loved ones.  Durham used public funds to establish Maplewood Cemetery just southwest of downtown in 1872, but it was not until 1924 that the city created Beechwood Cemetery to provide public accommodation for burial of people of color.   Before 1924, African Americans had privately purchased and used several burial plots, including Geer Cemetery, located at what is now the intersection of Camden Avenue and Colonial St., just northeast of downtown Durham.   This cemetery accommodated some 2000 people before the city of Durham deemed it full and closed for additional burials in the 1940s.  The subsequent fates of Maplewood and Geer Cemeteries say much about the separate and unequal ways of 20th century Durham society and continue to speak to the uses of memorials and history that are very much under discussion across the south today. 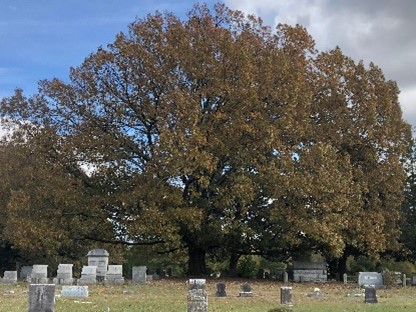 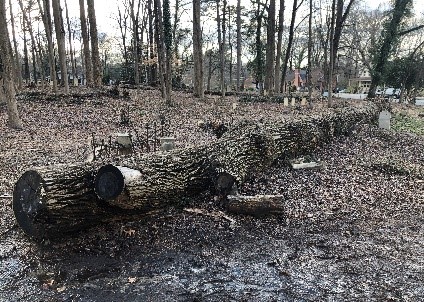 Maplewood contains the final resting places of many prominent white Durhamites including Julian S. Carr and several members of the Duke family.  The grounds of Maplewood today are well-kept by the Cemeteries Management division of Durham city government.  One section of the cemetery is shaded by a grand old oak tree.   Geer Cemetery contains the resting places of many prominent African American Durhamites including Margaret Ruffin Faucette, founder of White Rock Baptist Church, and Augustus Shepard, father of James E. Shepard, the founder of North Carolina Central University.  Until very recently, Geer Cemetery had nearly vanished into a tangled overgrowth of trees, vines, and grasses.  Fallen trees and trash littered the ground; one very large tree smashed a number of gravestones when it fell.  As I first walked the grounds of Maplewood and Geer Cemeteries over a year ago, I was struck by the stark difference in their conditions.  I encourage anyone asking questions about structures of institutional racism to visit these two sacred places and feel the differences through their feet as they stroll the pleasant park-like spaces of Maplewood and then carefully tread the uneven and unkept grounds of Geer.  Such comparative visits can provide a small, embodied experience of the distances we have yet to cover to undo systems built on separate and unequal foundations. 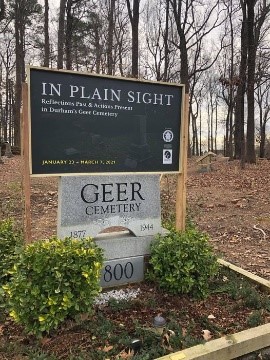 Geer Cemetery has not been completely abandoned.  In the decades since its closure, families of those interred continued to visit their loved ones’ graves and perform acts of maintenance and upkeep.  Yet green and growing natural forces gained the upper hand.   Some of the families and others with an interest in the past and present of the burial ground formed an organization, the Friends of Geer Cemetery. After decades of change and growth, this group has a new momentum to, in the words of the group’s present mission statement, “Restore, Reclaim, and Respect” the cemetery and the stories of those buried there.   One of the key issues facing the organization is establishing a clear deed of ownership for the land.  While the initial purchase of the property is recorded in city records, the current legal status of that deed has been lost.  Friends of Geer Cemetery has organized and supported volunteer clean-up efforts in the cemetery and has worked with the city of Durham to begin to bring the city’s resources to bear in clearing and cleaning the grounds in a more significant way.  Before the Covid-19 pandemic, I participated in several clean-up days and was moved by the physicality of the experience.  The weathered and often jumbled grave markers, the casket-shaped depressions in the ground, the grave goods and other mementos left at loved ones’ gravesites resonated with my own experiences of that ultimate common human event of burying and remembering family and friends lost to death.    The state of disrepair of the cemetery provoked something else in me: an anger at the disrespect of honoring a burial ground of one racial group while allowing the burial ground of another group to become effaced in a short time, based on the “mere distinction of colour,” a phrase James Madison used to describe what we now know to be a  socially constructed categorization without biological meaning.

The Friends of Geer Cemetery has obtained grant funding to perform an archaeological survey of the cemetery and to develop an on-site exhibit highlighting the stories and histories of African Americans in Durham, especially those buried in Geer Cemetery.  The exhibit, In Plain Sight, is now open for a limited time for self-guided tours and for docent-guided tours as described on the exhibition website.  I invite you to walk the ground in Geer Cemetery and read the exhibition’s panels telling the stories of the land and of those buried there.  I invite you too, as you may have time, to walk the ground in Maplewood Cemetery and feel with your feet and see with your eyes, the tale of these two cemeteries on opposite sides of one small southern city. 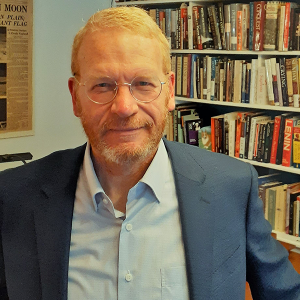