A Reinvention of Gross Hall 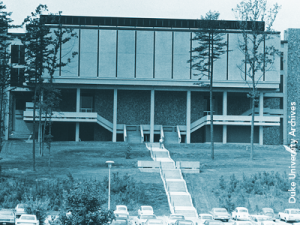 It’s exciting when you have been around a place long enough to see a long needed improvement come about (less exciting when it’s been long enough to see something noticeably decline!)    Throughout my time at Duke I’ve thought of Gross Hall as an outdated monstrosity that no one ventured near. I take that back – I occasionally took a shortcut behind it when walking from Towerview towards Erwin Road. But I definitely never knew what was inside…

The exciting new development is that the Social Science Research Institute is moving to Gross Hall, and it looks like there will be plenty reason to step inside! The latest GIST magazine outlines their plans, and this interview with SSRI Director Thomas Nechyba appeared in DukeToday. They are branding a totally modern, sophisticated space, including an Apple or Google-esque open meeting area called “The Connection.” I think it will be of value to the whole university to learn more about SSRI and utilize what they have to offer. By emphasizing research methods and data processing, they enhance the work of any discipline. Nechyba mentions that interdisciplinarity happens when different disciplines “leverage their expertise with that of others,” and I think SSRI wants to help people make those connections in sophisticated ways.  He goes on to say that his hope for three years down the road is that “no one at Duke will wonder what it is that SSRI does.”

So, if I stick around Duke a little longer Gross Hall may be the latest hot spot on campus!