A Matter of Conscience: Remembering Desegregation in Durham 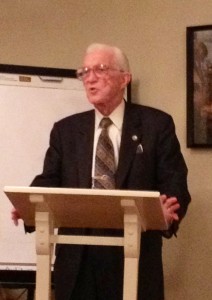 I attended an event last night that made me very proud of the city of Durham. This year, 2013, marks 50 years since many significant events in the Civil Rights Movement, including the famous March on Washington in August and Martin Luther King’s “I have a dream” speech. It turns out Durham made significant progress with peaceful desegregation efforts in the spring of that year, ahead of the curve and avoiding some of the terrible violence that was erupting in other cities.

My church hosted an evening with Wense Grabarek, who was elected mayor of Durham on May 18, 1963. We watched a half hour interview with Mayor Grabarek that will air on WTVD on May 25 at 1:00pm, and which is also available on YouTube.  He had to jump right into the issue of desegregation when, on May 19, he faced a riot situation in front of the Durham County jail and courthouse. After calmly diffusing that episode, he followed up on his promise to address the community’s civil rights concerns, immediately forming a Durham Interim Committee of civic and business leaders.

With what seems to be professionalism and respect, community members had conversations with one another, considered whether change needed to be made, and if so, how to go about making changes effectively and peacefully. In the course of literally weeks, the city of Durham voluntarily desegregated restaurants, hotels, and other businesses, more than a year before the Civil Rights Act of 1964.

Mayor Grabarek shared his reflections that appeared in the Durham newspaper on June 5, 1963:

I believe most of you will agree with me that the days of inaction are past.  Time is here for us to reexamine our moral, social and economic consciences in the light of present day conditions and circumstances.  When we do this, we think in terms far greater than ourselves as individuals.  We think in terms of our fellow man, our immediate community, our state, our country, and our God.

One of his repeated claims about this period was that conscience brought people together. In a beautiful concluding remark, he says “our diverse togetherness gave light to our soul, and identified Durham as to who we really are.”

This insight into our local history is particularly relevant considering the simultaneous 50th anniversary of Duke’s desegregation. We should take this opportunity to think about who we really are as a community 50 years later as well – what are our matters of conscience today?