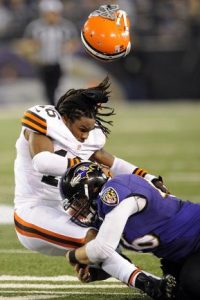 To prepare themselves for the Super Bowl yesterday, many people are asked themselves some important questions: What kind of dip will I make? How much beer do I need to buy? Will the toss be heads or tails? Which commercial will be the best? Will it be the 49ers or the Ravens? I can certainly relate to most of these concerns (though, I must admit that once the Redskins lost, I was just not invested in the postseason). But, maybe the question that few, if any, are asking themselves is the one that’s the most important: is watching football ethical?

For lifelong football fans, myself included, this might be a shocking question. Perhaps it seems like something only those in high academics would debate. But, with the recent death of Junior Seau, the ethicality of football has been front and center. For those of you who don’t follow the sports world, Junior Seau was a linebacker who played most famously with the San Diego Chargers, becoming a sports icon in the San Diego area. Seau retired in 2010, after playing since high school. In 2012, he committed suicide at age 43. Later, it was revealed that Seau suffered from chronic traumatic encephalopathy (CTE), a form of chronic brain damage that has been discovered in other NFL players who died, as well. For those who knew Seau, they say the last few months of his life were marked with abnormal behavior. Just this month, the Seau family sued the NFL over the brain injuries he sustained during his career as a linebacker.

My first reaction to hearing about Seau’s tragic suicide was probably similar to many others who followed the story. Though terribly sad, Seau chose to play football and knew the injuries were a risk. Sure, the NFL could have provided more medical and psychological help to its players once they retired, but it doesn’t seem like we can hold them responsible for his death, right? But, then I started reading more and more about the perils of professional football.

In 2010 Malcolm Gladwell penned what has since become a rather famous op-ed in the New Yorker comparing football to dog fighting. Gladwell recounted the story dozens of former NFL and college players who are, or were, suffering from brain injuries. Line players can suffer up to 1,000 hits in the head in just one season. All these head injuries seem to have a real and scary effect on the players. Seau’s suicide wasn’t the first, and certainly won’t be the last. In 2006, Andre Waters, a defensive back, shot himself; Owen Thomas, a defensive end and former UPenn captain, hung himself; retired safety Dave Duerson shot himself in 2011; and former safety Ray Easterling shot himself just a week before Seau did. This is not an isolated incident.

But, football players choose to play football. They are never forced to play, and in fact few who desire to play at the highest levels achieve it. Moreover, they’re getting paid a pretty good sum of money, so that makes up for possible injuries and risk…right? The flip side of this free will argument is that football is, as BuzzFeed writer Kevin Lincoln wrote, “the contemporary equivalent of gladiatorial combat…killing young men slowly…our loyalty condones this and makes it not only acceptable but wildly profitable.”

Do both these arguments have merit? Certainly, no one is ever forced to play, but the cult of adoration surrounding football creates a whirlwind that becomes hard to stop. Perhaps most alarming is that these dangerous hits don’t start at the college level, or even high school. It starts in elementary school with Pop Warner. Moreover, it’s not as if the trauma of multiple hits to the head begins when a player actually makes it into professional football. It begins all the way back in elementary school and slowly builds. College athletes aren’t even paid for the risks they are taking. Should we really let children play a game we know to be dangerous and have potentially life-altering effects? And, football hits have gotten more severe over time as players get faster and bigger. Even President Obama shared some concerns about this in a recent interview, saying that although the NFL players are getting paid, “as we start thinking about the pipeline, Pop Warner, high school, college, I want to make sure we are doing everything we can to make the sport safer.”

Moreover, why isn’t the NFL doing more to help the current players and those entering the game at a young age. Rather than address the physical and psychological traumas of football, the NFL constantly finds ways to obfuscate and ignore the issue. It will be interesting to see what their reaction to the Seau family suit will be

But, even if the NFL were more open with their players about the potentially behavior-altering, traumatic nature of football, what else could they do? Short of banning football or capping how long players can play (which seems unlikely given the extraordinary pay incentives and loyal fanbase), as long as people keep watching football, football will still be played. So, do we have an ethical imperative to stop watching football? Should we demand real change in the NFL’s policies and incentive system in order to protect the players? Are we contributing to the disturbingly long litany of former NFL players who have committed suicide or been seriously affected by brain injuries?

It’s hard for me to address these questions. I have always loved football. I’ve watched games with my dad since I can remember. I have many good memories of Duke Football game days, Super Bowl parties, and Friday night games in high school. It’s not something that’s easy for me to come to terms with—yet, I can’t deny how troubling I find all the evidence mounted up against the NFL. I don’t know what the answer is, but I do know that yesterday I was thinking about a lot more than what kind of wings I should get for my Super Bowl party.