A Bold and Arduous Project 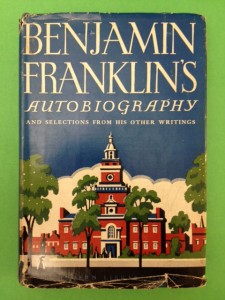 I mentioned recently that I’m reading The Happiness Hypothesis by Jonathan Haidt. In a fascinating chapter on “The Felicity of Virtue,” Haidt details an experiment by Benjamin Franklin. It turned out I had a copy of his autobiography on my bookshelf (passed down from my grandfather), so I went straight to the source to explore further.

Ben Franklin decided that he was going to pursue “the bold and arduous project of arriving at moral perfection.” While he thought he knew right from wrong, and the virtues that would lead to a good life, he realized he would really have to train himself to simultaneously and continuously follow his proposed virtues.  I’ll list his guiding principles:

To habituate himself to all of these virtues, he decided to focus on one at a time, for one week at a time. He devised a chart with the 13 virtues as rows, and the days of the week as columns.  The first week he would monitor his devotion to temperance, and if he perceived himself to transgress, he would make a mark on that day of the week. The next week he would move on to the next virtue, and thus go through a thirteen week cycle, four cycles in a year. With practice, the virtues were strengthened and the chart was marked less and less. After some time he said, “I was surpris’d to find myself so much fuller of faults than I had imagined; but I had the satisfaction of seeing them diminish.”

A bold and arduous project indeed! Do you have any interest in trying it? Which virtues would vex you the most? (Franklin, for one, said he found himself “incorrigible with respect to Order.”) Do you even agree with this framework? I shared the concept with a friend who said he thought that such scrupulousness would be exhausting, for one, but also constraining in an unhealthy way. Another described it as taking a lot of the humanity out of the good life. It may be extreme, and it is limiting in its conception of “the good life.” I do appreciate, however, the attention it gives to character formation, as a kind of moral education. A question we ask around Kenan all the time is “how are we to live an ethical life?” Don’t worry; we are not going to hand you a virtue chart when you walk in the door! But it’s an interesting thought experiment – what does virtue mean, and how does it contribute to our lifestyle, our communal well-being, and our happiness?

If you catch yourself reading this at the end of the workday, I’ll mention again that Jonathan Haidt is speaking at 5:30 this evening in the Bryan Center for the 2013 Boyarsky Lecture in Law, Medicine & Ethics. I think it will focus more on his second book, The Righteous Mind, which is next up on my reading list.