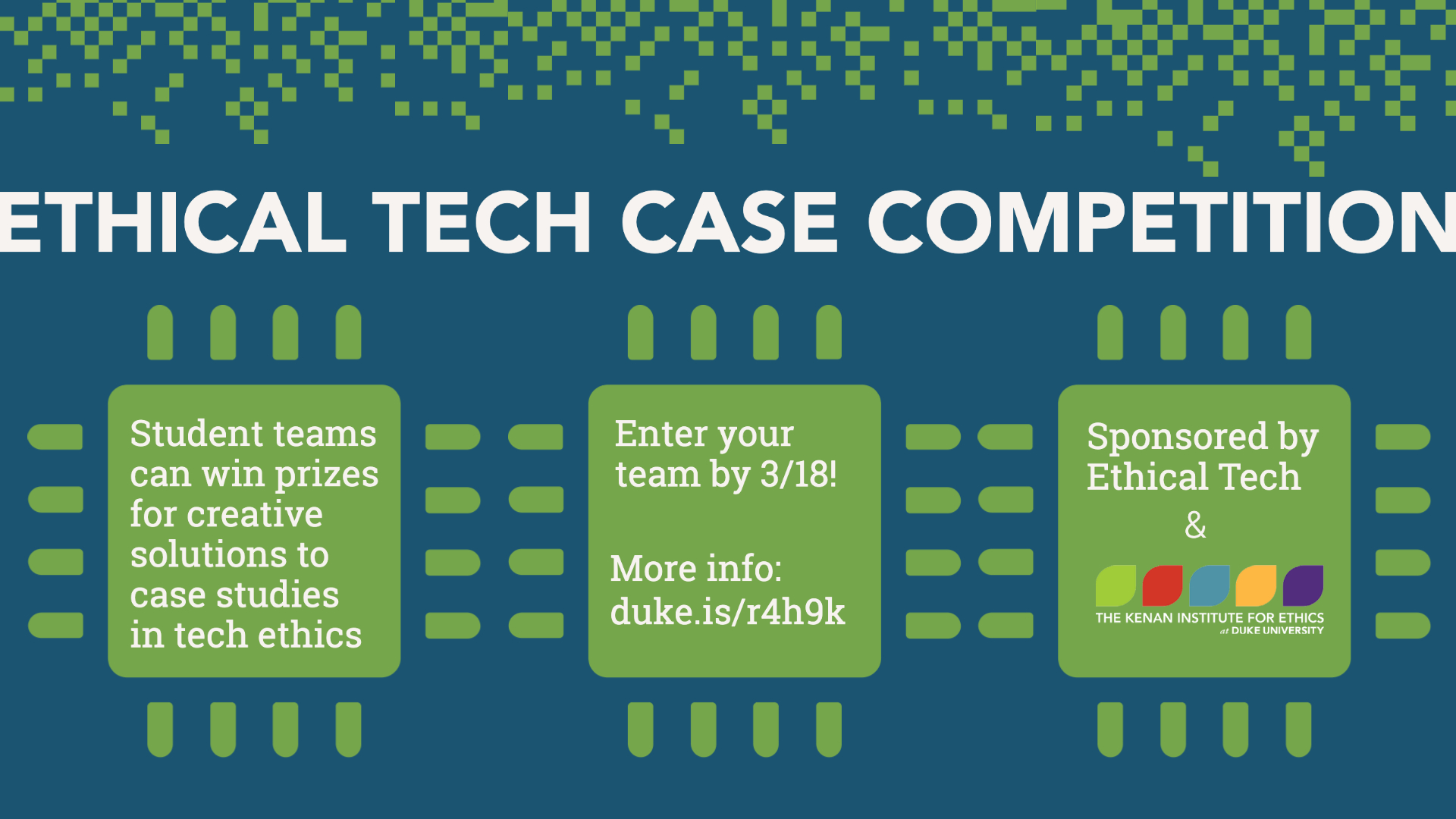 CONGRATULATIONS TO THE WINNING TEAMS AND A HUGE THANK YOU TO ALL PARTICIPANTS!

Organized by the student-run Ethical Tech and supported by Technically Right at the Kenan Institute for Ethics, this annual competition gives Duke undergraduate and graduate students an opportunity to tackle a practical case challenge centered around technology and ethics in a multidisciplinary way. Problems involve the issues of ethics, legality, privacy, business, and technical feasibility to give competitors a wide view of decision making.

Competitors will be assigned to or register as teams of 3-4 members. It is recommended that teams consist of members with varying backgrounds in engineering, business, policy, law, philosophy, computer science, economics, psychology, design, etc. Teams will be given the problem statement and case file one week before the submission date, during which time they are free to consult any sources, including professors, alumni, and working professionals.

Winning teams will have an opportunity to virtually meet with the competition judges who are experts from both the private and public sector. Winning submissions will be featured on the Kenan Institute and Ethical Tech websites.

Teams of 3-4 Duke undergraduate or graduate students will submit a creative solution to the case study provided in the competition packet. This year, students will be asked to consider the ethical, business, and policy implications of a company pursuing the development of facial recognition technology.

Data brokers (aka information brokers, data providers, and data suppliers) are companies that collect data themselves or buy it from other companies (like a credit card company), crawl the internet for useful information about users –legally or otherwise – and aggregate that information with data from other sources. 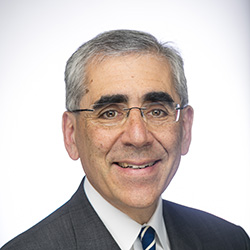 Michael J. Schoenfeld is Duke University’s vice president for public affairs and government relations and chief communications officer.  He has responsibility for communications and advocacy for Duke University and its affiliated entities, including Duke Health, leads the university’s Washington, DC, center, and serves as Duke’s chief spokesperson. He is also a visiting professor of the practice at the Sanford School of Public Policy, where he teaches a course on media and politics.

As the university’s chief external affairs officer, Schoenfeld directs Duke’s local, regional, national and global communications, leads federal, state and local advocacy efforts, counsels the president and trustees, represents the university to a wide range of constituencies, and oversees crisis and issues management. Schoenfeld is also co-founder and chairman of Futurity (www.futurity.org), a multimedia consortium of more than 60 leading research universities from the U.S., Canada, the U.K. and Australia.

Schoenfeld previously served as vice chancellor for public affairs at Vanderbilt University in Nashville, TN, from 1997-2008. Earlier, he was senior vice president for policy and public affairs at the Corporation for Public Broadcasting (CPB) in Washington, D.C. He also held reporting and leadership positions at the Voice of America, including news and sports anchor, Congressional liaison officer, and executive assistant to the director, and served as the first director of program development at Worldnet, the U.S. Information Agency’s global satellite television network.

Schoenfeld is chair of The Seminar and a member of the Page Society, the National Press Club, the Public Diplomacy Council and the Association of American Universities Public Affairs Committee. He is currently chair of the Triangle Community Foundation board of directors and the Regional Transportation Alliance, is vice chair of WUNC-North Carolina Public Radio board of directors, and serves on the board of PBS-NC, PineCone: The Piedmont Council for Traditional Music, Hirondelle USA, and the National Academy of Television Arts and Sciences (Midsouth). A 1984 Duke graduate, Schoenfeld received a master’s degree in public policy from Stony Brook University in 1986. He and his wife Elizabeth, a writer and editor, live in Durham 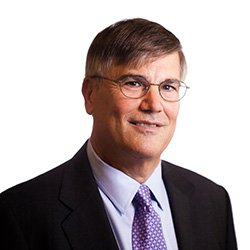 Dean Brenner is a leading expert on the allocation of spectrum for wireless technologies and on wireless public policy issues in the United States and around the world. In January 2022, the Chairwoman of the Federal Communications Commission (FCC) appointed him to be Chairman of the FCC’s Technological Advisory Council to lead a new initiative to advise the FCC on 6G, as well as leading ongoing work on spectrum sharing, emerging technologies, and machine learning/artificial intelligence.

Mr. Brenner has testified five times before US House of Representatives and Senate committee hearings on spectrum and wireless policy issues, including 4G/5G/6G and Wi-Fi, the digital divide, cybersecurity, and infrastructure policy. He has spoken at spectrum policy conferences in the US, China, South Korea, Belgium, Great Britain, Hong Kong, Spain, Israel, and Canada.

Mr. Brenner was formerly Senior Vice President, Spectrum Strategy & Technology Policy for Qualcomm. He directed Qualcomm’s global spectrum strategy and tech policy initiatives and represented Qualcomm before the FCC and other US and Canadian agencies on spectrum and tech policy. For 18 years, he successfully led Qualcomm’s efforts to win regulatory approval for new wireless technologies, including the world’s first deployments of 4G in unlicensed spectrum; the world’s first deployments of supplemental downlink for faster downloads; the world’s first mobile video network on 700 MHz spectrum; the first deployment in the US of cellular vehicle- to-everything (C-V2X) technology; and, the allocation of numerous spectrum bands in many countries for 3G, 4G, 5G, Wi-Fi, and other wireless technologies.

Mr. Brenner has unique expertise in spectrum auctions. He led Qualcomm’s winning bidding team in auctions in India (2.3 GHz band), the US (Lower 700 MHz band), and the United Kingdom (L Band). He headed the regulatory team which obtained the approvals to sell Qualcomm’s spectrum licenses in all three countries, the $1.9 billion sale of Lower 700 MHz spectrum from Qualcomm to AT&T in 2011.

Mr. Brenner holds one patent on spectrum sharing. He was the co-chair of the US Policy Task Force of the 5G Automotive Association, an industry group working on connected car policy, and he was a member of many wireless industry groups. 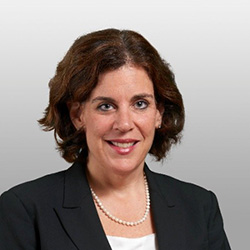 As a Duke alumna in electrical engineering and with over 30 years of legal experience as a partner at the global law firm Covington & Burling LLP, Lee has a long career bridging technology, law and policy. At Covington, she served as co-chair of the firm’s global and multi-disciplinary Artificial Intelligence Initiative and counseled organizations on a broad range of data and technology matters, including policy, governance, intellectual property, regulatory, transactional and digital transformation matters. She has written and spoken extensively on AI, data and emerging technology including to the Council on Foreign Relations, the Singapore Embassy (with the Ambassador), the Federal Judicial Conference, the National Judicial College, the Athens AI and the Rule of Law Roundtable, the Aspen Institute, the Society of Corporate Secretaries and Governance Professionals, Stanford University, New York University, and other leading institutions.

Lee serves on the Board of Visitors of Duke University’s Pratt School of Engineering and the Dean’s Council for Penn Law Women. She is an adjunct professor at the University of Pennsylvania Law School. She served on the Biden-Harris Campaign Policy Committee and on the Board of the UC Hastings College of the Law Worklife Law Center. She is admitted to practice before the United States Patent and Trademark Office.

Lee is a champion for diversity, equity and inclusion. She was appointed the founding Chair of Covington’s Women’s Forum in 2003 and later served as Co-Chair of the firm-wide Diversity Committee. She is a graduate of the University of Pennsylvania Law School and the Duke University, School of Engineering. She is also a proud Duke parent. 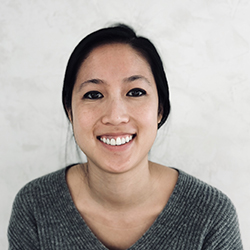 Chenny Zhang is an investor at In-Q-Tel, the strategic investment firm for U.S. national security agencies, managing a portfolio of startups. Prior to In-Q-Tel, Chenny served as the China portfolio lead at the Pentagon’s Defense Innovation Board (DIB), where she supported the AI ethics principles project, 5G report, and other initiatives. Before the DIB, Chenny was cofounder of a software startup in Beijing, overseeing product development and technical support. Prior to that, Chenny was a program manager at Cisco Systems. Chenny received an MA from Johns Hopkins, and a BA from Boston College. 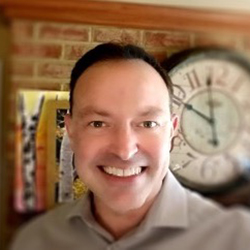 Adam Newman is founder and CEO of Pyrl.io (pronounced /’pearl’/), the world’s first purchase privacy platform. Pyrl’s mission is to give consumers both the privacy and usage of their most valuable information, returning trust to consumer relationships.

The idea behind Pyrl was sparked when Adam lost his father to cancer, and began researching why it is that consumers have no way to see the item-level product purchases they have made that could affect a family’s health over time. Realizing the heart of the issue is basic data privacy and access rights, he is now developing the world’s first purchase privacy platform. He believes, “Like a pearl, our data is precious and valuable. It should be protected in a shell that only we can decide to open to others.”

Newman recognized that consumers’ most valuable information is data about how they spend their money, because the things consumers purchase paint an intimate portrait of who they are. While valuable to businesses seeking to earn customers, this same purchase data is invaluable to consumers’ own wallets, health and privacy – yet inaccessible to them. He created Pyrl to change that and put consumers in the driver’s seat. By serving as a privacy agent, Pyrl stops the sale and sharing of users’ information, instead allowing people to utilize their own purchase data and interact with companies that earn trust.

Adam has always been passionate about tackling issues central to the lives of all Americans. Prior to Pyrl, he helped launch and run Common Securitization Solutions (CSS), serving as its founding head executive and then COO. CSS is a joint venture across the Federal Housing Finance Agency, Fannie Mae, and Freddie Mac that helped to standardize U.S. housing finance after the last financial crisis, and which now returns about $500M annually back to taxpayers.

Adam’s career also included a stint overseeing platform re-engineering at Arbitron, a public consumer data research company acquired by Neilsen, and he was previously a technology entrepreneur in NYC.

Adam resides in Maryland with his wife and four children. When not working on Pyrl, he helps his wife grow her early childhood education company, serves as a startup mentor with the NYC Fintech Innovation Lab, and enjoys hiking the great outdoors with his kids and their overly energetic black lab rescue pup. 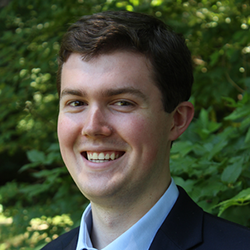 At Duke, he co-founded and runs nonpartisan student-faculty initiative Ethical Tech; co-founded and runs the student cyber program; co-wrote the university’s “Intro to Cyber Policy” course; and co-wrote and co-taught its “Cyber and Global Security” seminar. He researches global technology issues at Duke’s Sanford School of Public Policy, including artificial intelligence in public education, the ethics of international technology transfers, and smart city data policies in the U.S. and China.

Previously, he worked on issues of cyber and national security at the NSA’s Laboratory for Analytic Sciences. Prior to that, he researched technical cybersecurity and data privacy issues at Duke’s Computer Science Department. He has held fellowships with Interact and the Duke University Program in American Grand Strategy.

His writing on technology, ethics, public policy, and international security has been published by a variety of popular and academic outlets, including The Washington Post, The Atlantic, Foreign Policy, WIRED, Lawfare, Slate, The Diplomat, Bulletin of the Atomic Scientists, Journal of Cyber Policy, and the Council on Foreign Relations. He has contributed chapters to multiple books and appeared on BBC World Service, Public Radio International, and Australian Broadcasting Corporation, among others. Follow him on Twitter @jshermcyber.