More than thirty minutes before the keynoters were scheduled to take their places, an at-capacity Goodson Chapel already was engaged in a reunion of friends, chatting amongst colleagues, and introductions between those finding themselves seated next to strangers with whom they felt an immediate connection. Amidst hugs, handshakes and brief conversations Professors Cornel West (Harvard) and Robert George (Princeton) made their way to the front of the chapel to deliver the 2019 Kenan Distinguished Lecture in Ethics. Newly-tenured Professor Joseph Winters, Religious Studies and Department of African and African American Studies, moderated West and George’s “Conversation on friendship and faith across political difference.” 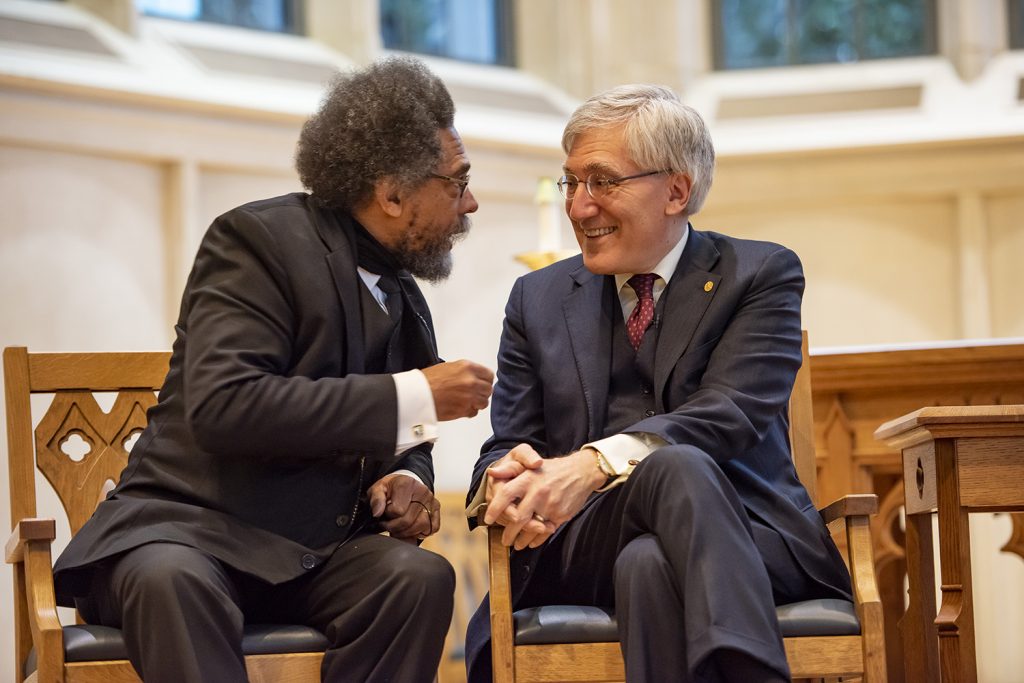 Leading the conversation, Winters open-endedly asked the speakers to define friendship and talk about how they met and became fast-friends. “It was love at first sight,” George replied as he began the story of how two philosophically-opposed professors met, resulting in lessons about the value of respecting the basics of one’s humanity.

Friendship is fundamentally volitional. It is willing the good of the other for the sake of the other. … Where we fail is when we lose track of the other person’s humanity. 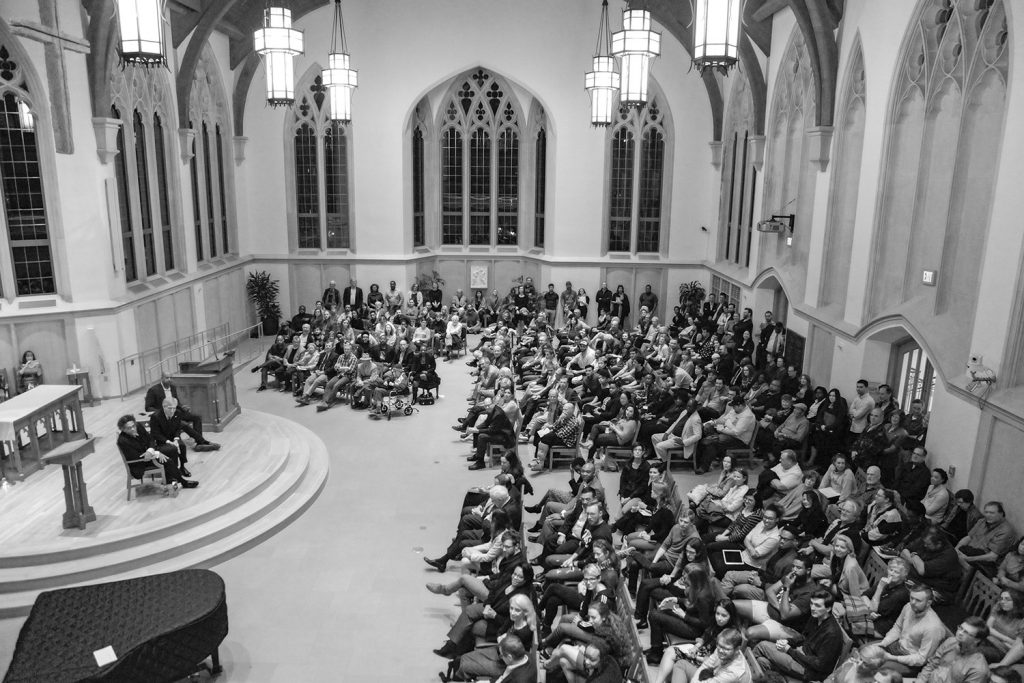 Through questions from both Winters and the audience, West and George further defined the importance of befriending someone whose ideas differ from your own, and how easy it can be if you first open yourself up to the possibility or even “just finding someone else interesting.”  They shared about how teaching together and arguing with each other has enabled them to cultivate authentic friendship. Both emphasized that the American democratic project depends not on political agreement, but on embracing our shared “thin line of understanding or common ground.”  George illustrated how the American shared-identity is often considered fragile because it lacks a singular element such as national origin, religion or cultural heritage; yet, he believes our commonality based on the precepts of freedom is strong enough to handle conflict.  Therefore and crucially, building on this foundation requires that we respond with openness to ideas and opinions that challenge our own. For both West and George, preserving and strengthening our fragile democracy means pursuing civic friendship by acknowledging that each of us is as broken and fallible as the people with whom we disagree.

Much of the evening was devoted to praising the emotional dividends that friendship pays to individuals and the communities they live in.  Both George and West spoke to their Christian faith and the lifetime challenge to succeed knowing that the “line of good and evil runs through the human heart.”  As West observed, people may have intense hatred of a sin, but must still try to love the sinner.  They also encouraged their audience to delve into philosophical and literary texts for nuggets of wisdom about the meaning and value of friendship, including Plato, Rawls, Pascal, Kierkegaard, and Dostoyevsky.

In a poignant exchange during the question and answer period, Jennifer Attalah, a Palestinian-American and Israeli citizen who recently moved to the Triangle, reflected on “the loneliest journey” of trying to bridge the divide between Arabs and Jews in the Middle East and the criticism it evoked from her own.  “How do we love others as we invest time in civic love without receiving it back?” West asked, “I love Black people not to get loved back, but because Black people are worthy of my love.” 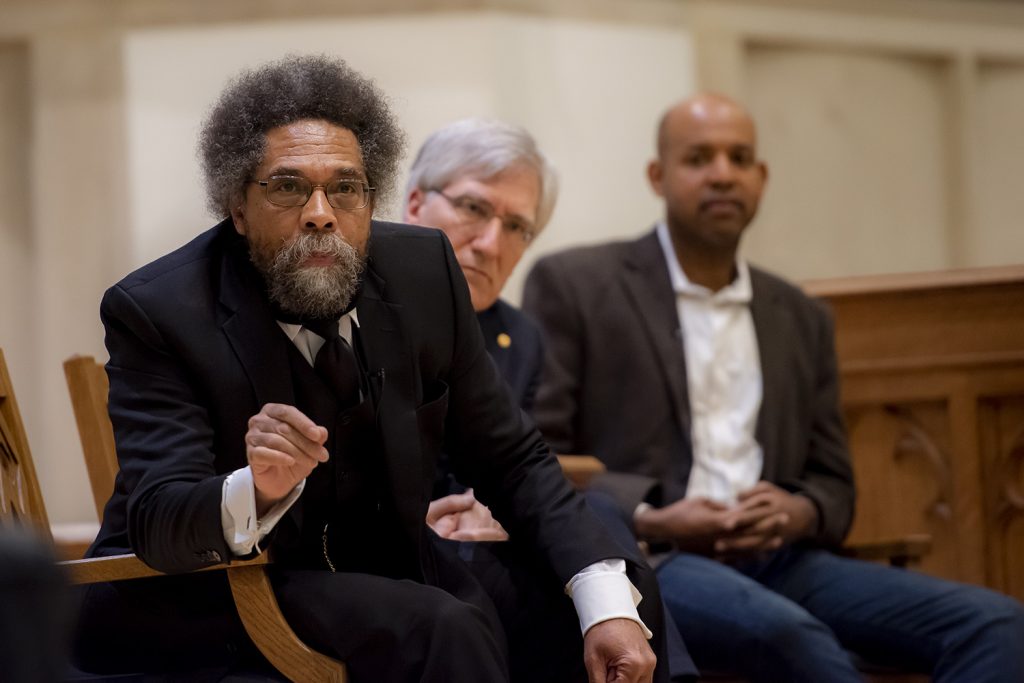 Following the event, the conversation continued outside at a relaxed reception in the shadow of the iconic Duke Chapel.  Drawing a crowd from across the state that included Durham newcomers, engaged members of the community often representing charitable groups, students, faculty and political figures, all attendees enthusiastically praised the conversation they’d been a part of.

I will remember this discussion for a long, long time. It was so powerful to witness the friendship of these two courageous, enlightened men of deep integrity and faith…despite their many differences. It’s rare to hear a discussion that is both intellectually stimulating and also leaves you wanting to become a better person.

It was a tremendous experience. I look forward to seeing and sharing the video. God bless.

I asked Cornell about the growing segregated public schools and their impact on future civic friendships/relations. He recommended that we take this opportunity to pour love on the children and youth in the challenged schools and to work with teachers to do the same.

What a pleasure to see Brother Cornel West again! He and Robert George brought their masterclass in civic friendship to Duke. Their dialogue is a meaningful model to mobilize our better angels. 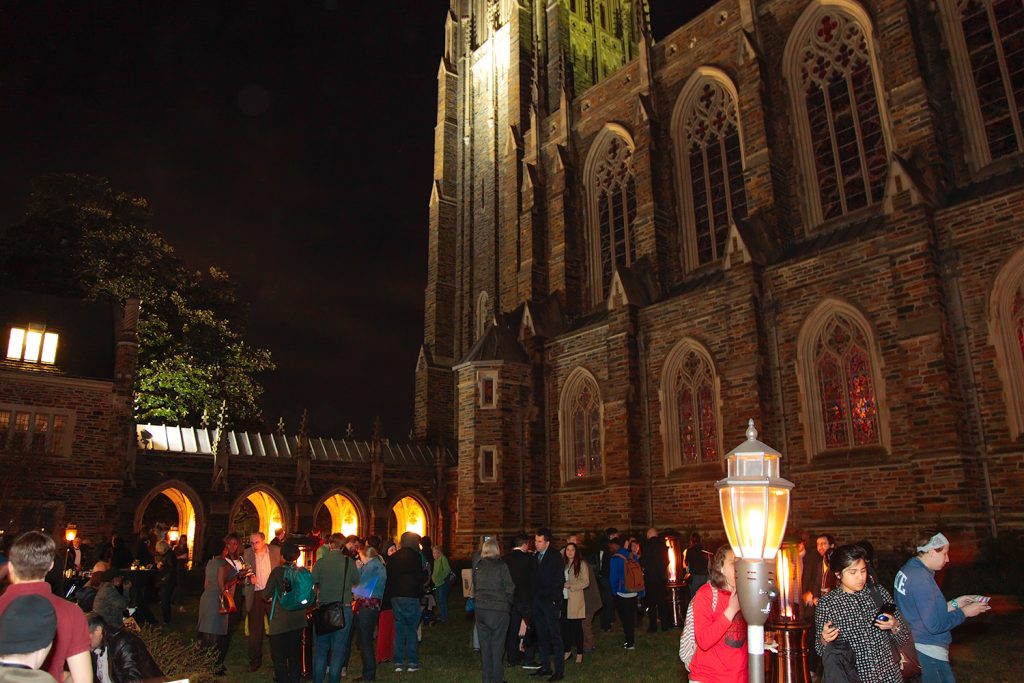 The annual Kenan Distinguished Lecture in Ethics is an integral part of the Institute’s ongoing efforts to promote civil dialogue across campus and beyond and would not be possible without the Kenan Family and Kenan Fund for Ethics.