The Kenan Institute for Ethics leads an alternative spring break for undergraduates every year. This year I was fortunate to travel with a fantastic group of six students and a co-leader to the Tucson, Arizona region and Nogales, Mexico to learn about the journey migrants take across the U.S.-Mexican border, and to study border enforcement issues.

Our group visited different stops along the migrants’ journey to the U.S. We also examined the migrant deportation process if they were caught in the U.S. unlawfully. Prior to the trip, I had little to no understanding of the different political, humanitarian, and policy problems linked to the U.S.-Mexico border.

We visited an U.S. Immigration and Customs Enforcement (ICE) Detention Center in Florence, Arizona where detainees are held for 72 hours before they are deported to their home country or transferred to another facility if they appeal their deportation. ICE officials led us on a tour describing the different services offered to the detainees. They led us through what looked like top-notch health facilities and raved about the food served in the detention center. Yet, as I walked past jail cells or detainees who were playing soccer in a barbed wire enclosed area, I hated the idea that I was touring a detention center as if it were a school in which I was considering enrolling. The officers talked about the detainees as if they could not hear us talking about them on the other side of bars. I felt as though we should not have been talking as if the detainees were invisible.

The previous day, while we were touring Nogales, Mexico, I had the same impression that the individuality of each detained was overlooked. There our group started a conversation with a recently deported migrant. The guide and translator started asking the migrant questions about his experience in Spanish, presumably assuming that all of these migrants were fluent in Spanish.   However, the interviewee answered in perfect English. He explained that he had spent his entire life in Tucson. I was struck by the idea that the entire group was seen as a whole as opposed to individuals with varied experiences, different cultures, and different languages. 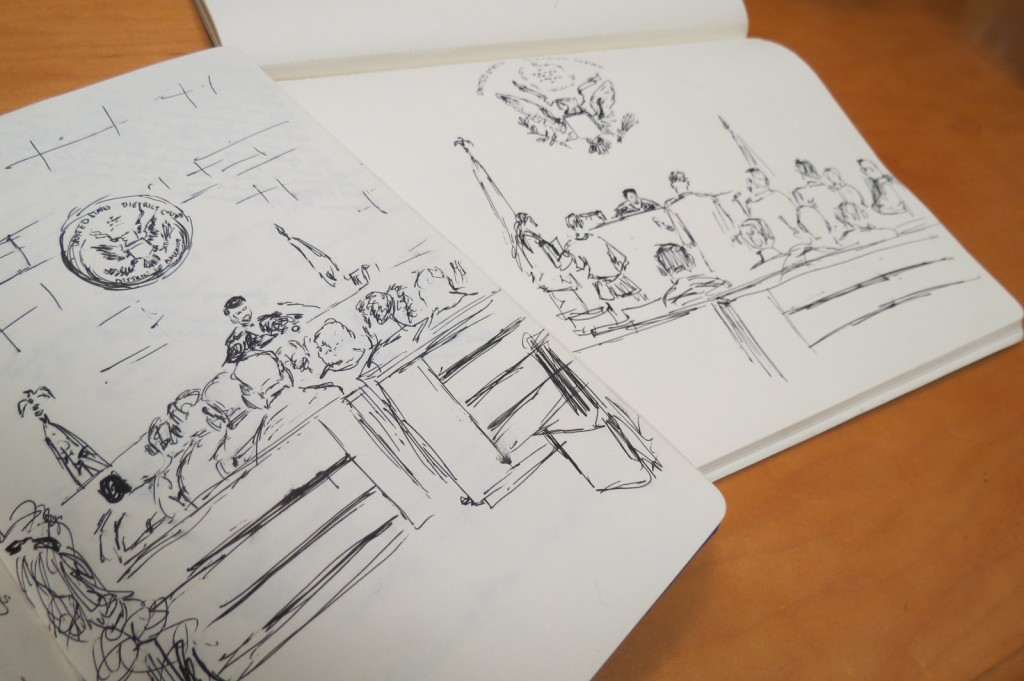 On the third day of our trip, we attended an Operation Streamline hearing at the Federal Courthouse. At the hearings, up to 70 individuals are tried at a time. These mass hearings occur each day in several locations along the U.S.-Mexico border. At the hearing we attended, 50 individuals were tried and all were found ‘guilty’ or ‘culpable’ of unauthorized entry or re-entry across the U.S. border.   For this offense, defendants were give a criminal record and sentenced to anywhere from 30-180 days in prison. The ICE Detention Center we visited was one of many holding areas for detainees prior to deportation after they had served their time in jail.

Before the hearing, one woman introduced herself as a member of the Green Valley Samaritans. The Green Valley Samaritans is a humanitarian group that provides aid to migrants in distress. This retiree attended at least one Tucson Operation Streamline hearing every week in an act of solidarity with the migrants being tried. She explained that although those being tried would not know that she was a constant presence for the process. Rather, she was there as a reminder to the lawyers, judges, and other individuals who also were there on a consistent basis that there are individuals, such as herself, who are keeping watch over the process. Additionally, she wanted to serve as a visible, albeit silent, advocate for those on trial who may not have anyone supporting them through this inhumane process.

Although numerous thoughts crossed my mind while I tried to process the trip, I could not shake the notion that undocumented migrants are a vulnerable population, just as are children and prisoners. In research, to work with a vulnerable population requires special approval by the Institutional Review Board (IRB). As the term vulnerable, these groups have less autonomy than adult American citizens who are not incarcerated. They also need more protection from possible abuse due to their status. As the IRB provides important oversight to research protocols with these populations, so too might we need to have better oversight as to how we are treating migrants in the U.S. at a minimum, we may need to recognize their individuality. Perhaps recognizing the extent to how vulnerable populations are is important to contesting and challenging the status quo of the system.

While this one week experience gave me a only tiny insight as to the experiences of those who partake in an Operation Streamline hearing, migrants who are detained and then deported, or the guards who work in an ICE facility, I now can put faces to the migrants, the officials, and workers that are a part of this saga. The Kenan alternative spring break has given me a better understanding of the complex debate over border security issues.